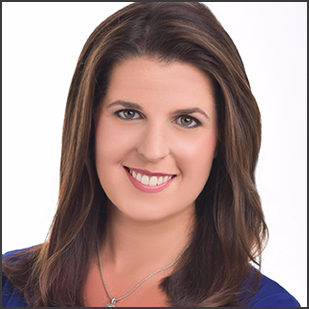 Meteorologist Jaime Travers can be seen on television in St. Louis weekend and weekday mornings. Jaime was born and raised in Chesterfield and graduated from Parkway Central High School in 2004. Her interest in weather developed from her fascination with tornadoes. Her dad’s childhood home in Chesterfield was destroyed by the F4 tornado of January 1967 that ripped through Chesterfield, Creve Coeur and Maryland Heights of St. Louis County. This made her question “why weather happens.”

Jaime started her career at KFVS in Cape Girardeau, MO and then moved to tornado alley to work at KSN in Wichita, KS. In December 2014, she earned her Certified Broadcast Meteorologist seal from the American Meteorological Society.

Jaime graduated with highest honors from the Georgia Institute of Technology with a Bachelor of Science degree in Earth and Atmospheric Sciences. While at Georgia Tech, Jaime was a student volunteer at the National Weather Service office in Peachtree City, GA. Later, Jaime attended Saint Louis University to earn her Master’s degree in Meteorology. Her thesis examined atmospheric environments similar to the catastrophic flooding event of May 2010 in Nashville, TN. This research was motivated by the simple fact, “flooding is the number one cause of weather-related deaths.” While at SLU, her research results were used to design products for National Weather Service offices across the country. Jaime also interned at KTVI/KPLR during the summer of 2010.

In Jaime’s free time, she enjoys dance, hot yoga and outdoor activities while rooting for the Cardinals and the Blues. At home, Jaime enjoys hosting BBQs on the patio or cooking on a quiet evening with her husband, Evan and her Pomeranian, Amber.