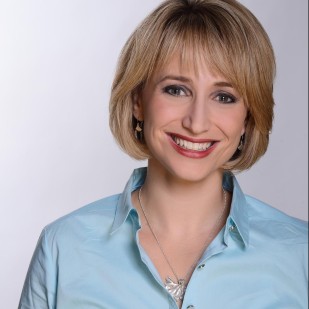 I’m the meteorologist for FOX 2 News on Friday and Saturday evenings. You’ll also see me on other KTVI newscasts as well as occasionally filling in on our sister station, KPLR. I also manage content for the stations’ websites, FOX2now.com and KPLR11.com.

Born and raised in north St. Louis County, I graduated from Incarnate Word Academy in 1999. In 2003, I earned my Bachelor of Science degree in Geography/Meteorology from Western Illinois University. While in school, I spent the summer of 2002 interning with the FOX 2 weather team.

I headed north and started my career in beautiful Anchorage, AK where I worked for three years as the weekend meteorologist for the CBS affiliate, KTVA. I was thrilled to return home to St. Louis and join FOX 2 in October 2006.

My husband, Glen, and I are huge St. Louis Cardinals and St. Louis Blues fans. We also love theatre, food trucks, and spending time with our dog, a Samoyed named Mo!